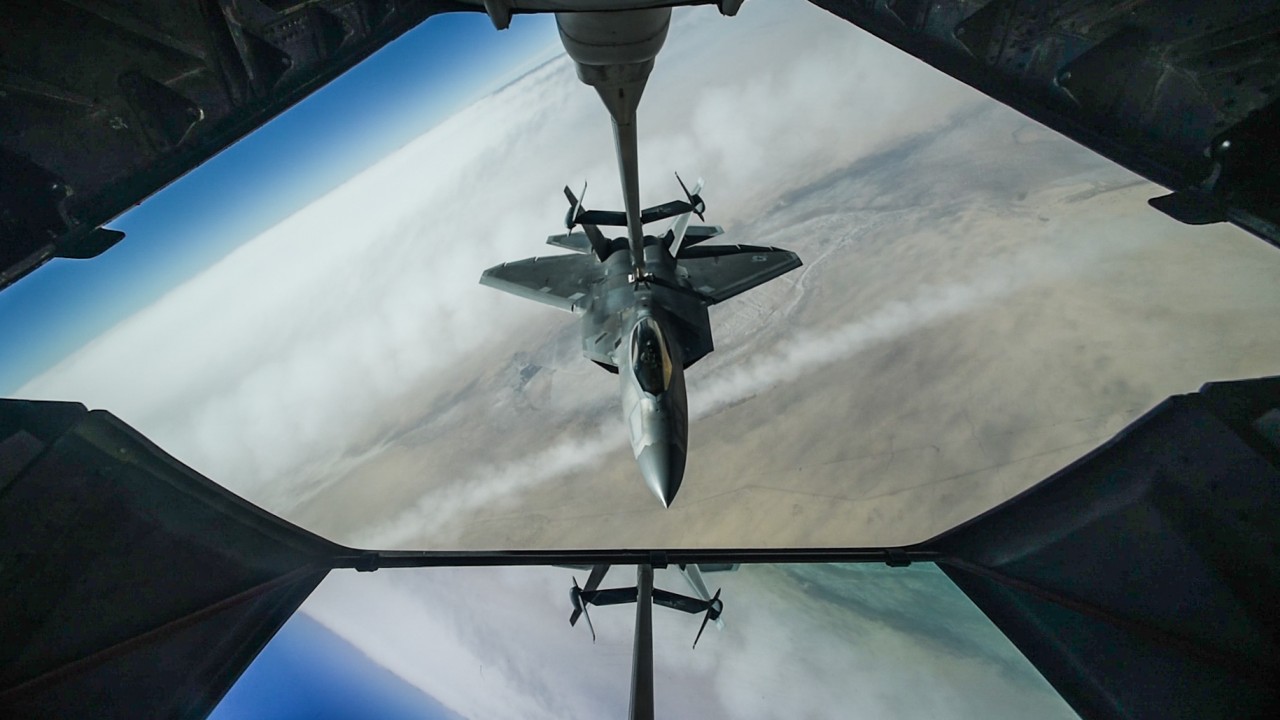 Air Forces Central Command is correcting the record on the April 14 strikes inside Syria—the 19 Joint Air-to-Surface Standoff Munitions used in the mission were the older, standard version, not the extended range variant, which was initially briefed to reporters. In a statement to Air Force Magazine, AFCENT also now reports that F-22s were indeed flying in the area, ready to strike Syrian or Russian air defense systems and other assets if they threatened either coalition aircraft or US ground forces in the region.

“US Air Force F-22 Raptors played an integral role in protecting ground forces during and after the multinational strikes against Syrian chemical weapons production facilities on the morning of April 14,” AFCENT spokesman Capt. Mark Graff said. “Thanks to its unique fifth generation capabilities, the F-22 was the only airframe suited to operate inside the Syrian integrated air defense systems, offering an option with which to neutralize [Integrated Air Defense System] threats to our forces and installations in the region, and provide protective air support for US, coalition and partners on the ground in Syria.”

Graff declined to expand his comment to explain why the F-22s did not respond when Syria launched 40 surface-to-air missiles in the wake of the US-Anglo-French strike.

Russia has deployed S-400 air defense systems in Syria. More than simply a system to shoot down missiles or aircraft, it can also serve as a guided tactical ballistic missile system, with the ability to shoot ground targets, which may explain Graff’s suggestion that the Syrian IADS threatened “installations.”

In a briefing for reporters on April 14, Joint Staff Director Lt. Gen. Kenneth McKenzie said he did not know what US fighters escorted B-1s on the raid, acknowledging fighters were there but not specifically identifying the F-22. Later, Pentagon spokesmen said B-1B bombers, which launched the JASSMs, were escorted by Marine Corps EA-6B Prowler escort jamming aircraft. Neither the Pentagon nor AFCENT has recanted that information.

In an April 19 Pentagon press briefing, McKenzie said a contingent of fighter aircraft flying out of USAF bases in Europe provided protective overwatch of the USS Donald Cook in the Eastern Mediterranean during the strikes, but the ship was not threatened by Russian frigates in the region. Eyewitness reports have pegged those aircraft as F-15Cs from Lakenheath AB, UK, and Aviano AB, Italy, with tanker support from RAF Mildenhall, UK.

Pentagon spokesman Lt. Col. Damien Pickart told Military.com on Monday the standoff capability of the JASSMs was considered sufficient to “minimize risk to aircrew and aircraft.” The F-22, he said, “was available, but wasn’t required for the operation as planned.” He added, “That said, the F-22 is well-suited for the defensive counterair mission it continues to conduct over Syria, protecting coalition forces on the ground and in the air.”

The F-22 does not have a close air support mission. Its ground attack capacity rests with its ability to carry 1,000-pound JDAM satellite-guided missiles and 250-pound Small Diameter Bombs, also satellite-guided.

During the strikes, Russia’s advanced air defense systems in the area were “energized” but did not engage,” McKenzie said on April 19. The Syrian military’s older, Russian-made air defense systems attempted to engage US missiles, but almost all of the air defenses were fired after US, UK, and French missiles had already struck their targets, he said.

“Fifth generation platforms like the F-22 and the F-35 will continue to serve as the primary platforms capable of operating in the lethal threat rings of IADS environments like those found in Syria,” Graff added to his description of the F-22’s role in the April 14 strikes.

Graff also acknowledged the 19 stealth cruise missiles employed against Barzeh “were, in fact, not JASSM Extended Range (JASSM-ER) munitions” as reported by the Pentagon immediately following the attack. Rather, the munitions used were “JASSM-A, or the standard, non-extended range versions of the munition,” Graff said. He confirmed the attack marked the first use “of any variant of the JASSM.” The basic JASSM conducted its first flight in 1999, and has a range of about 275 miles, while the ER variant more than doubles that range to almost 600 miles. The two missiles are externally almost identical.

Air Combat Command chief Gen. Mike Holmes told Air Force Magazine on Monday that when attacking a chemical weapons complex, the release of toxins can be mitigated by hitting it with a large number of weapons, thus burning up the chemicals. Barzeh was hit by 76 US missiles—19 JASSMs and 57 Tomahawk Land Attack Missiles—with about 1,000 pounds of explosives each.

A top US military official told Air Force Magazine on April 17 that Barzeh stored mainly “precursor” chemicals, which had not yet been weaponized, so it should “not be surprising” that there were no dangerous toxins detected after the strike.

JOHN A. TIRPAK AND BRIAN EVERSTINE